HEAR from Blueberry’s bass player Thom Pighills about his European tour, kick-starting a rehearsal place for fellow musicians and his passion for rock music.

A skilled bassist in Frisk and a guitarist in Self-Immolation Music, the 28-year-old hails from a very euphonic family. His mother, brother and two sisters also play musical instruments.

“My Dad has had the biggest influence on my musical tastes,” he said. “He bought me my first CDs and got me listening to Neil Young, Bob Dylan, and Bruce Springsteen. We listen to a lot of 60s and 70s classic rock music. He also got me into Hawkins and Motorhead. As I’ve got older it’s become more of a thing between us, we share more of the same music tastes.”

The Blueberry marketing executive and account manager is currently performing to fans across Vienna, Austria, Denmark, and Milan (to name but a few) with his band Frisk.

“Touring in a van in the Summer is hot! All you see most days is the inside of a van and a venue, with the odd stop off at a swim spot and some bars after the gigs,” he said. “It’s not like a tour bus; we don’t have a kitchen. They’ll be a table to play cards on and the back has a huge compartment with all the gear and equipment in it. We’re generally put up in people’s houses who are either involved with the gigs or the promoters themselves. You get treated well, cooked breakfasts and beers. There’s a lot of cards and mix CDs to get you through the drives. We’re all good friends and it’s a lot of fun, but you don’t come back feeling refreshed.”

“Frisk’s fans generally like to move a lot and mosh, which is the whole point of the music. It’s better enjoyed live and loud,” said Thom.
-

“In both bands I generally play punk gigs or in DIY circles, which is a bit odd in that there isn’t really a traditional fan or band dynamic. They’re close-knit and anti-profit when it comes to art and culture. They don’t like commercial music or mass culture. Most punks play in bands themselves. They’re good people. Frisk’s fans generally like to move a lot and mosh when we play, which is the whole point of the music. It’s better enjoyed live and loud.”

“We’re quite a musical bunch at Blueberry come to think of it,” said Leeds-based Thom, who picked up the bass at 14. “Connor, who started this year, plays synth in Self Immolation Music. And I used to gig in Leeds with Max, who plays in successful neo-soul, jazz band TC & The Groove Family. We also have Romin, who produces house music.

“Frisk used to be influenced by noise or industrial. We had somebody making harsh noise on a synth behind the guitars and drums. But nowadays, we’re more hardcore and metal influenced. We’re influenced by old British and American hardcore punk bands in the main. The development has been fun and in reaction to what we enjoy playing. We basically make a lot of noise and play fast. It’s a bit odd being in a band that makes a lot of unpleasant noise because it’s quite niche and not for everybody. But everyone at work shows an interest and I’ve done well to land a job that understands and gives me the flexibility I need.”

When he’s working at Blueberry or performing to live audiences, Thom is grafting at Damaged Goods, a not-for-profit DIY music venue in Armley, Leeds that he helped launch. The aim of the project is to offer affordable rehearsal spaces to musicians, space for mobile recording engineers to work in and eventually a music venue for artists to perform in.

“We’ve built two practice rooms from scratch with the help of some local musicians, who are also joiners and handymen. Having our own space is great. Plus, I’ve also learnt how to lay bricks, plaster, lay carpets, book-keep, and sound-proof a dusty warehouse. Eventually we will have two more practice rooms and it will be a small venue. We want to keep costs low and support musicians of all creeds and backgrounds.” 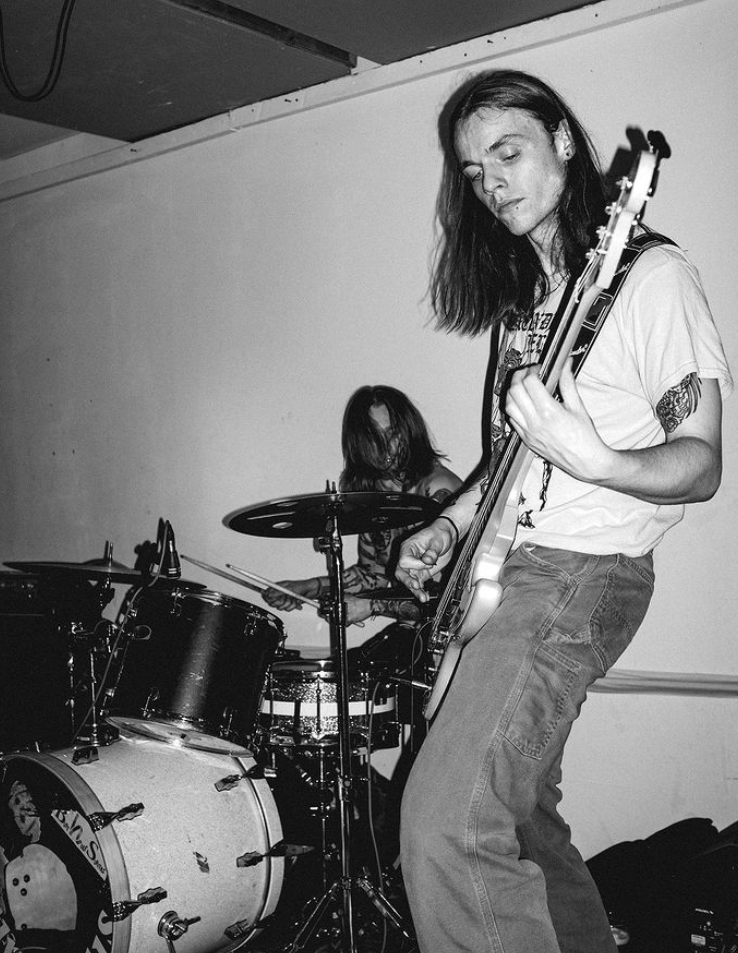 During the national pandemic, Frisk wrote their latest album Stalker, which was recorded under a reputable independent label, at The Stationhouse in Leeds.

“The first gigs we played after lockdown were some of the best gigs we’ve ever played as a band. I think there was a lot of pent-up energy, and it was such a release. We fed off the crowd. Everybody was so excited. But there was also a weird element to it because afterwards we all had to take Covid tests. I think it’s been tough for everyone. Venues and artists need supporting. And it’s only going to get harder with the cost-of-living crisis. The vinyl resurgence has largely been bad for smaller bands, artists, and independent labels. But I like records myself so I can’t point the finger at anyone. Delays in record pressing plants are crazy due to there being a very limited number of pressing plants worldwide. Covid-related supply shortages and major labels re-pressing just about every record that has ever been recorded has also delayed the release of our album. But we’ve got four new songs coming out soon and hopefully the LP will be out back end of this year, which means we are likely to tour again next year. Self Immolation Music has gigs and releases in the calendar and Damaged Goods will keep me busy.

“It’s good fun performing to a live audience. It can be nerve-wracking, but it has got less so over the years. We’ll keep playing gigs, touring where we can and writing music. Obviously I would love to make a living playing music but it’s not the objective or end-goal. I do it for fun and will keep doing it until it’s no longer fun.”

DIY circles or culture refers to people doing things for themselves. It also encompasses a wide range of elements in non-mainstream society, such as grassroots political and social activism, independent music, art, and film. *

Written By Angela Kunawicz
Angela is an award winning journalist, videographer and marketeer who has worked in regional and international media outlets across the UK and Middle East, including the BBC and Abu Dhabi Media Company. With a flair for human interest stories, hard news and campaigns, she has also been commended for her outstanding photography and video productions.

INTERVIEW: Blueberry's Talented Max Purcell-Burrows on Glastonbury 2022 and the highs of performing with TC & The Groove Family

HEAR from Blueberry’s resident trombonist Max about the buzz of live jazz and why his band’s debut album is a love letter to Leeds.

The Stressbusting Guide You Need to Read

WHETHER you’re working from home, studying for exams, dealing with a break-up or simply need a better work-life balance, everyone feels stressed and lonely sometimes.

How Much Does it Cost to Live in Leeds vs London?

EVER wondered how much it actually costs to live, work, shop and socialise in Leeds? How about in London? Find out in our Leeds versus London infographic.

All you Need to Know About the Rising Cost of Living

UK INFLATION is rising at its fastest rate in 30 years as fuel, energy and food costs continue to soar. Read Blueberry’s blog on the rising cost of living and discover our tips on how you can manage your finances.

HOUSEHOLDS across Britain are feeling the pinch as the cost-of-living rises. Check out Blueberry’s top 10 tips to save money.

Diversity in the Workplace

EMPLOYEES are your face in the marketplace. So, it makes sense to have employees who reflect the ethnic, gender and age composition of your customer base. In less than 20 years, one in four of us in the UK will be over 65. That's more than 14 million people.

If the pandemic has taught us anything, it's not to sweat the small stuff

MORE than two years after the COVID-19 pandemic upended our lives, many of us will feel a huge sense of relief as the last remaining restrictions finally come to an end. England and Northern Ireland have already removed all constraints, and Scotland and Wales are due to follow suit by the end of March. As we enter this new phase of ‘living with Covid’, many of us are returning to our normal workplaces, while myself and others continue to enjoy the flexibility of hybrid working.