I got the chance to get involved with British Science Week this week, so I thought I'd take the opportunity to demonstrate the positive way that science is introduced to children at an early age.

At Blueberry our work involves a lot of engaging with educational establishments, especially with primary and secondary schools. The interesting thing about having children myself, is that I get to see first-hand the activities that take place there. Last week I had the pleasure of taking part in British Science Week at my daughter’s school. A couple of weeks prior I was sent a letter explaining the events being held and decided along with many of the other parents to pop along.

At a primary level, children are expected to investigate the differences between objects, people and places with an end goal to further understanding the world around them. In addition, this activity morning was the first time that many of the kids were being introduced to the scientific field. Primary education is often criticised for leaving STEM subjects behind, with research sponsored by Brunel University London suggesting that primary teachers believe that science is becoming less important on the curriculum agenda (CBI, 2015). Therefore, it was great to see how much effort the teachers put in to make it fun, presenting informative and instructional activities like those shown on Blue Peter. I was really impressed with the high level of engagement the 5-year olds were given, and it gave a great platform to really get them interested in science for the very first time. 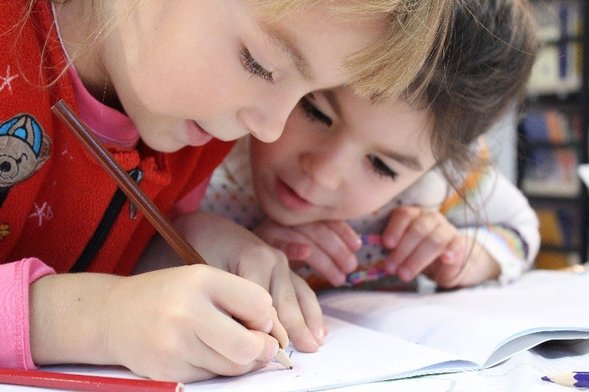 There were six or seven stations in the assembly hall including, planting sunflower seeds, making lava lamps, slime, and playdough from scratch. Not only are these things quick, easy and cheap to organise, the kids thoroughly loved it - and I learnt a couple of things myself! These simple tasks not only involved creativity, but also applied scientific concepts like understanding how oil and water separate, how things grow and evolve, and how to put compounds together to make something even better.

I have to give the teachers and the other members of staff at the school credit, because they took simple activities and made them into something really engaging. I really think that schools should continue to get parents involved in their children’s education, and the ideas and concepts from the morning can all be carried on at home long after the morning is over. This is worlds apart from how science was taught back in my day!

It gave the parents an insight as to how easy it is to be resourceful and fun when entertaining our kids. We all know how easy it is to stick them in front of the TV playing the newest XBOX game that they got for Christmas. Experiences like this remind us that it’s more fun and of more value when they get stuck in to making something themselves.

However, all I can say is I hope that their Grandma and Grandad like their lava lamps…because that’s what they’ll be getting for Christmas this year!

Written By Faresh Maisuria
Founding the business over a decade ago, Faresh has been at the forefront of it's growth and was proudly selected to be a part of the Goldman Sachs 10k Small Businesses programme. Faresh works on campaigns across all sectors, with a focus on ensuring that the data strategy, call approach and wider marketing all align with the objectives of the campaign.

Giving Back to the Community During COVID

A chance conversation with one of our customers has opened an opportunity for us to provide PPE to over 30 care homes across Leeds and Yorkshire.

Order books have collapsed, staff have been furloughed, and cashflow has been reduced to a trickle. Sales forecasts and marketing plans – even just from a few weeks ago – are pretty much obsolete. While the government has announced support for businesses, understanding how to navigate through the labyrinth of overlapping schemes, measures and funding pots isn’t always easy - so where should businesses turn to for support?

Small Business Charter - Summer Reception at the House of Lords

I was extremely honoured to attend the Small Business Charter Summer Reception at the House of Lords last week as a guest of Lord Young of Grafton.

Bridging The Gap Between Government Targets And Employer Expectations

We're pleased to announce that we've published a piece on FE News in collaboration with Calderdale College regarding our joint marketing campaign to promote the Rise programme.

This week we had a student from a local school complete work experience with us, as part of their learning they have shared a summary of their week.

As a small business in the service sector, we had no long-term plans of exporting but found ourselves reactively exporting. Basically, we were responding to international enquiries, but we’d never been intentionally chasing them. Here’s what we learnt over our exporting journey!

PECR and Marketing to Sole Traders

The grounds around B2B marketing can sometimes seem confusing for businesses, especially following the new GDPR legislation which came into place in May 2018.

Brushing up our Knowledge - Back to University

When you think of higher education, the main picture that comes to mind are sleep-deprived students proudly waving their degree certificates at Graduation after too many late nights in the library (we’ve all been there, done that!) However - Universities all over the UK are offering so many other services and schemes aimed at small businesses.

Helping under 16's find their feet in the world of work.

The Christmas build up is well underway, so what does that mean for B2B lead generation? We share some insider knowledge on how to approach telemarketing around the Christmas period.

5 tips for managing your CRM implementation

Organising the data for your CRM is one of the fundamental building blocks to ensuring it is successfully adopted by the users it's intended for. We've put together five handy tips to help you understand the processes involved in successfully managing your data for CRM implementation.

Take a look at some of our tips for the most successful approaches to lead generation in a B2B environment.

Picking Partners to Help You Sell